My Wolf: A Proxy for Fear 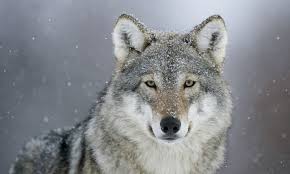 I never considered myself a coward. Though in the end it would seem as though I was unable to work past paralyzing fear. I acted nothing like a courageous knight fighting for the safety of a damsel in distress. More like a deserter of an army, fleeing for my life instead of fighting for my home.

The terror that would test my courage was in the form of a four legged creature. Though this was not just any creature… it was a wolf. The grotesque animal lumbered on four heavily muscled legs and stood as tall as the average man. Long claws and paws the size of a human hand made the creature seem impervious to death. Its eyes were an eerie blue, showing nothing but my emotions as it devoured. Like its soul, the pelt of this large animal was pure black. The moonlight reflected off of the beast, creating a malicious shine on its fur. Scars littered the creature’s body and one in particular went from its right ear all the way to the tip of its muzzle. Not only was this monster indescribably intimidating in its physical presence, it had a dark spiritual energy that resounded within its eyes and snapping jaws.

The way I had come to discover this monstrous being was on a day that seemed to fit its dark presence. It had rained, quite hard, pummeling the ground in buckets of icy water. Due to this downpour, the sky was a dreary gray, and reflected my already dark thoughts. This was the day I would meet an old friend, one whom I desperately needed to speak to. Although I was not deeply thrilled to have this conversation with said friend, it was not something that could be avoided. Since I had never gotten close to anyone, I was going to share some serious information about myself with hope that it would strengthen our relationship. I was going to share the burden of my incapacitating social anxiety.

If I waited too long I feared I would lose my motivation, so I rushed to a bus stop and forced myself to focus. As I waited, a sudden chill crept within my body and settled in my bones. The hairs along the back of my neck stood on end and this was the moment I realized that I was completely and utterly alone. No one occupied the streets and no cars in sight – not even the presence of a single bird. The feeling of dread consumed me as I glanced about in a frightful fashion. My neck threatened to snap as I swiftly looked right to left, left to front, front to back. An eerie breeze ruffled my coat and carried a scent which I had never smelled before. My body jerked violently as the odor clouded my senses and caused my eyes to water. It smelled like death and rotting meat.

It was at this very moment that the creature first appeared. At first I only heard the crinkling of dried leaves and the sound of moist soil sinking under the weight of another being. I did not turn to face this sound until I could no longer ignore the heavy breathing of said creature. With the dreadful smell now almost too potent to bear, I turned towards the sound and came face to face with an animal so far from reality that I believed myself to be in a dream. This notion did not last for long as I was once again engulfed in the stench of death that I realized permeated from the wolf’s mouth. The fangs that were inches from my face were so long they hung out of the animal’s jaws and were tinged in crimson red, presumably dried blood.

I cringed at the sight and a cold sweat coated my shivering body. I fought my instinct to run, and instead looked to the ground. I had read somewhere that wolves found eye contact a direct threat and that running would only provoke their instinct to attack. Instead of leaving like I wished, the animal stalked closer, sniffing the air around me before growling low in its throat. The sound was menacing in itself, but the feel of its hot breath against my cheek forced me to open my eyes and stare into the cold eyes of a natural predator.

It took a moment for me to realize that this creature was not like any wolf I had read about or seen in the zoo. No, this animal (if it even could be classified as such a thing) sought after me, and me alone. Do not ask how I knew this, for even now I am not sure. What I am sure of, is that no matter what, that creature was not going to let me see another day. As soon as I saw its mouth open wide, I sprinted. Past the bus stop I went, across streets, through alleyways, on mud and dirt and grass and concrete. I did not stop, even as my feet ached and shuttered under the fierce force in which I ran. I could hear the beast as it gave chase in a steady pace. Although adrenaline pumped through my veins, I knew that my body would not be able to sustain that speed for any longer. As I thought this, I turned into an alleyway only to be met with a brick wall. I stopped abruptly, almost falling forward as I did. Before I could even turn around I was tackled to the ground and enveloped in darkness.

I woke to a pounding in my head and a ringing in my ears. With a pained groan I rose from the concrete and immediately keeled over. My own heartbeat thumped inside my head: ba-bump, bum-bump, ba-bump. Fighting the dizziness that threatened to overtake me, I stumbled out of the alley. People walked past me, giving me curious looks now and again, but continuing on their way. I just stared for a moment, wondering what had happened and questioning my sanity. I decided to just brush off the occurance as a trick of my head, after all I was under severe stress with what I had to say to my old companion. With a calming exhale, I headed back to the bus stop and nearly missed a ride.

Head and heart still pounding, I muttered a quick thank-you to the driver and left the bus. As I made my way to my friend’s house, a familiar chill once again wreaked havoc along my spine. I walked faster, looking this way and that as if I could pinpoint the origin of that feeling. Finding nothing but empty street and a noiseless neighborhood, I went up the stairs to the house where my old companion lived. I knocked on the door only for the entrance to open at the force of my hand. A frown crept across my face at the realization that it was unlocked. This thought was forgotten when I heard the familiar sound of heavy breathing. That combined with the stench of death made my veins run cold. The growling that emitted from the house forced me out of my stupor and back a few paces only for the wolf to pounce. I screamed only for the sound to be cut off as the beast took my life.

My eyes opened to my old friend crouched over me with a worried expression. She smiled in relief as I lifted my head and focused on her. I returned her smile, but froze in fear at the sight of the wolf. No… wolves. There were two, the one I was familiar with and another that seemed tame. It did not have the scars that my wolf had, nor the dreadful eyes or smell. It had a collar and its hair was neatly trimmed. Both wolves were the same color, pitch black, but the one with the collar sat obediently next to my friend, looking right up at her. My wolf on the other hand, was seated next to me, just staring.

It took me a moment to realize that my friend was talking to me. She asked me what had happened, but I could only answer by pointing at the wolves. When she just gave me a confused look after glancing in the direction I had pointed, I shook my head and got up. Instead of looking at the wolves, I looked straight at her. I explained the fear I had experienced when heading to her house and how I had dealt with such unease for a long time. It took a while to say, as I needed to make sure she understood my discomfort with my very serious social anxiety. Instead of the tense silence I expected, my friend comforted me with a hug and explained that she too had her share of anxiety, but that she had learned to deal with it. Relief washed over me and as I followed her into the house, I turned to where the wolves were, but only saw grass and sidewalk.

My friend gained my attention once again when she called my name and told me she needed help fixing the roof. Did she not know about my fear of heights?