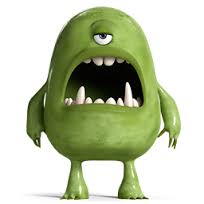 “Can you look under my bed for monsters?” A small voice from my right asked. I looked down to see my five year old niece looking up at me with her wide, brown eyes. She was clutching my leg like her life depended on it.

I kneeled down to her level and put my hand on her shoulder. “Zaynah, how many times have I told you that monsters aren’t real?”

She looked down at her Frozen slippers, almost as if she was ashamed by what she was going to ask next. “Can you just check in case?”

I stood up and held Zaynah’s hand, letting out a sigh of defeat. “Let’s go look for these so-called ‘monsters’ you speak of,” I said sarcastically as we walked to the room she shared with my six year old nephew.

I crouched down next to her bed, looking under it and sticking my hand there, as if I was trying to look for something I lost.

“Be careful!” I heard Zaynah call from a distance, earning herself a mental eye-roll from me.

“No monsters here,” I finally declared. “Time for bed now. Go tell Azlan to turn off the T.V. and to go sleep.”

She left the bedroom and ran into the family room, screaming, “Azlan! Come and sleep!”

When she came back, my nephew was lagging behind her in his Teenage Mutant Ninja Turtles pajamas. I picked Zaynah up and tucked her into the lower bunk-bed, while Azlan climbed the ladder and jumped onto the higher bunk-bed. I planted a kiss on each of their foreheads, turned off the light, and left the room.

Sitting on one of the couches in the family room, I waited for my cousin and her husband to come back home. I didn’t turn on the T.V. because I was baffled by something: Why do kids believe in monsters? Or, more importantly, why don’t adults believe in monsters? Was it because it was a bizarre concept to older people? I didn’t think that was the reason, because it was just too simple to presume. I finally got to the conclusion that we have our own monsters.

It might sound totally insane, but after pondering it, I realized that it’s true. We fight our own monsters that we create, which are living inside of us. For instance, the monster that I often find myself fighting is my inhibitions. Quite frequently, I disregard various opportunities because of how shy and insecure I am about myself. So, in order to defeat my monster, I have to ignore it and take the opportunity.

Maybe saying that there are monsters inside of us is just a complicated way to label our bad qualities, but it’s the best way to explain it, in my opinion.