The Music of My Father: A Reflection 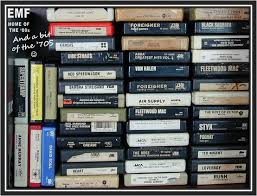 Every Spring for as long as I can remember, my father has dragged me into our backyard to help him set up his twenty-year-old outdoor audio system. And in the same span, the following seasons in my neighborhood have been filled with the sounds of the same ancient CD mixes. As a younger child, I did not exactly understand the appeal of Morrissey’s expressive croon, Ian Curtis’ macabre grumble, or Robert Smith’s accented, sad-boy plea. I innocently recognized the sound of cheap synths as fanfare for a newly arrived summer. As time passed, my appreciation for the happy-sad tones and dance-along beats grew. However, the pleasure that his music brought me had yet to reach that which was provided by my own tastes. I recently reflected on the ways in which these bands have affected my life and why I continue to tolerate listening to them every year. I have established a couple definites. For one, it is a representation of a simpler and relatively happier time and more significantly, it is a link to my father. If there is one thing in common between me and those mixes, it is that we are a conception of my father and filled with his ideas, passions, and dispositions. We are a piece of my father, creations brought to life on different media. So, at an age where I am supposed to be “finding myself”, I have decided that what a better and more novel way to do so than explore what is most similar to me, my father and his music.

To provide some background, my father is the son of two Chinese immigrants. He was born and raised behind a laundry in Brooklyn and through some elbow grease and pure power of will, earned the title of content suburban dad. Furthermore, in no way does he conform to the goth aesthetic one would expect based on the majority of his music taste. He prefers gray hoodies draped over off-colored work polos rather than fishnets, eye-liner, and skinny jeans. However, behind his humble appearance exists a seemingly unfitting music taste. Some of it is classic, Jersey-typical dad jams (Springsteen, etc.) as well as other miscellaneous artists. But, the majority of it has its roots in the post-punk movement of the 80’s characterized by the aforementioned style choices my father has failed to take up. Upon noticing this discrepancy, I have come to face the same question as many other young people, why does my dad like this music?

Brought up in a musical generation of mass-produced boy bands and idyllic girl/boyfriend-type artists whose ghost-writers chase after the latest pop-music trend, kids tend not to look for substance in their music. Squeaky-clean electronic melodies looped over an unoriginal articulation of feeling is enough to satisfy the sonic and emotional needs of today’s listener. Exploring outside this realm of sound and attempting to appreciate anything else is simply too much effort and not worth being looked down upon by less adventurous peers. So, when we are forced to listened to mom and pop’s disco cassette on a road trip, our hands are quick to the sides of our heads. But have we ever considered why mom and dad are so happy at this moment, dancing in the front seat? Have we contemplated the fact that their music has the same emotional impact as say what “Marvin’s Room” by Drake has on the common hip-hop fan?

To delve deeper into my father’s own tastes, I conducted a dissection of his favorite song, “This Must Be the Place (Naive Melody)” by the Talking Heads. If you remain fixated on the bouncing synth leads and David Byrne’s outlandish howl, the significance of the song can fly right over your head which it did for the whole year I spent trying to understand what made it so great. Only this past month did I finally have the long-awaited epiphany I was hoping for. Such an event did not disappoint, instilling the same spine-chilling sensation of falling in love, whether it be with another person or a completely new song. Suitably, “This Must Be the Place” is a love song. It conveys a sense of contentedness pursued by many but reached by few. The feeling described is not a state of extreme intimacy or blissful tranquility as many dream of. It is how love really is. Things may not be all that great but there is one constant force that keeps you going, the people that make you feel that where you are now is where you belong.

This unexpected look into my father’s psyche proved to be extremely moving for myself. It revealed that, for my father, our family is his “place” and the sharing of his music with us has been a subtle expression of his unwavering affection. The countless pool parties with soundtracks of confused children and Tears for Fears were just a really strange way of saying “I Love You”. As touching as this was, it was equally gut-wrenching thinking of how often I have criticized such an important symbol of his love. Hence, I plea to sons and daughters everywhere, give your “dad music” a chance. You just might learn a little something.