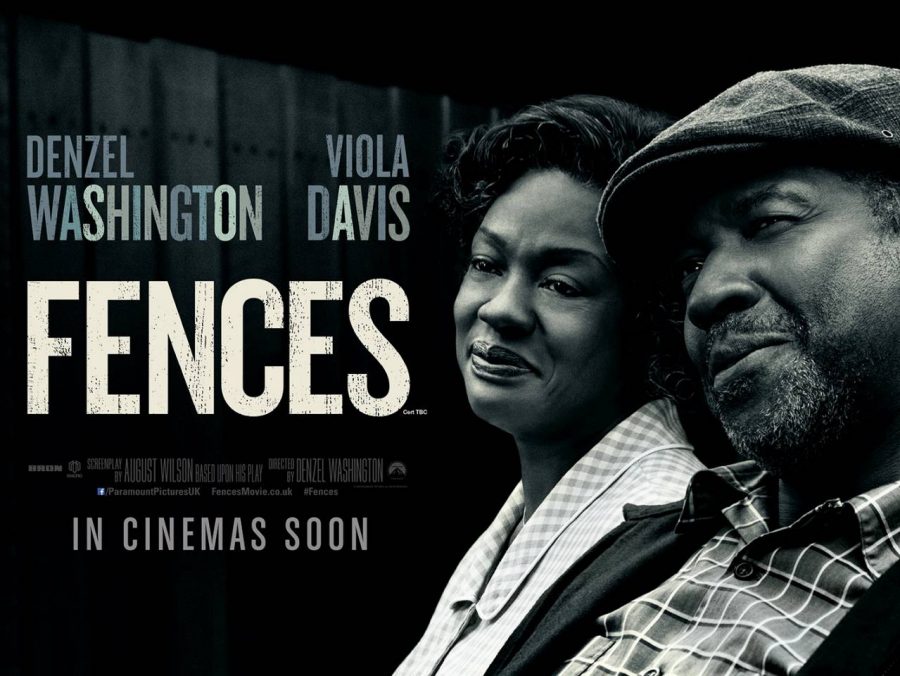 A man’s past can turn him inside out. Bring bitterness about and hate for a result that defines his present. This bitterness, expressed directly through the people that surround him, spirals in his path leaving turmoil and aggression imprinted in within his persona.

This unrested hate can result in distance between family and friends which distinctly is displayed in August Wilson’s Fences. Wilson, an African American playwright born in the city of Pittsburgh, initially wrote this as a play in a series of ten which exemplify and display the life of African Americans throughout the 20th century. With each play depicting a different decade of the century, Fences takes place during the 1950’s in Pittsburgh, PA. Denzel Washington bought the play and made it into this old-school drama.

Troy Maxson (Denzel Washington) is a African American man living in the Hill District of Pittsburgh, as a garbageman. He played negro league baseball but never made it further due to his age when the major league began recruiting African American ball players. This leaves Maxson bitter, rejecting the path which he tried to pave for himself. The regrets of his past fester into the tension between himself and his son Corey (Jovan Adepo) who is aspiring to play college football. Troy’s wife, Rose (Viola Davis), is a witness to his hate, yet brings out multiple sides within his character serving as an essential role in the film.

Denzel Washington plays the role of Troy effortlessly. His position as director was fulfilled by a precise vision, one in which was successful by presenting the emotion and sentiment within each scene. He presents his character with dignity and plays the part with pride. This is exemplified in the scene where he is explaining to his son Corey why he doesn’t have to like him:

With Corey’s question, “How come you ain’t never liked me?”

Troy’s response, “I gave you your life! Me and your mama worked that out between us. And liking your black ass wasn’t part of the bargain. Don’t you try and go through life worrying about if somebody like you or not. You best be making sure they doing right by you. You understand what I’m saying, boy?”

This scene directly began to display the disconnect between these two characters and set a foundation of their relationship. Troy Maxson had doubts about the outcomes that his son would get from playing college football. Corey became aggravated and defied his father’s orders of working at down at the A&P. This scene gives a preview of the  tense scenes further in the film.

Viola Davis recedes into the role of  Rose Maxson and becomes this saturated character, adding to the plot of the story. Her most brilliant performance was in a scene where Troy comes clean about events in his life, acting as a reflection on both of the characters’ lives. Troy explains, “ It’s not easy for me to admit that I been standing in the same place for eighteen years,” while Rose responded “I been standing with you! I been right here with you, Troy. I got a life too. I gave eighteen years of my life to stand in the same spot with you. Don’t you think I ever wanted other things? Don’t you think I had dreams and hopes? What about my life? What about me?” Davis expressed this character with trapped feelings and drowned emotions. In this scene, these emotions seemed to pour out of her, through the screen, and lay puddled by your feet. The scene was memorizing with its intense atmosphere and raw emotion which she displayed. One of the best acting performances of the year, her role will not go unnoticed at this year’s Academy Awards.

The true beauty of this movie was its ability to be transferred from the stage to the screen. Originally written as a play, these characteristics can be seen within multiple features of the film. The amount of settings the movie was filmed is very much relatable to that of a play with most of the film taking place in two or three places. The precise dialogue, just like that of a play, is meant to focus the viewer and drive the movie which it successfully accomplished. The outcome of thes story is not the winning factor in this film but the individual scenes which build up the tension are what displays its quality. Simplicity was truly golden for this movie. Washington’s direction with this movie was only something Wilson could dream of. Fences was one of the most precisely crafted and truly memorizing films of 2016.