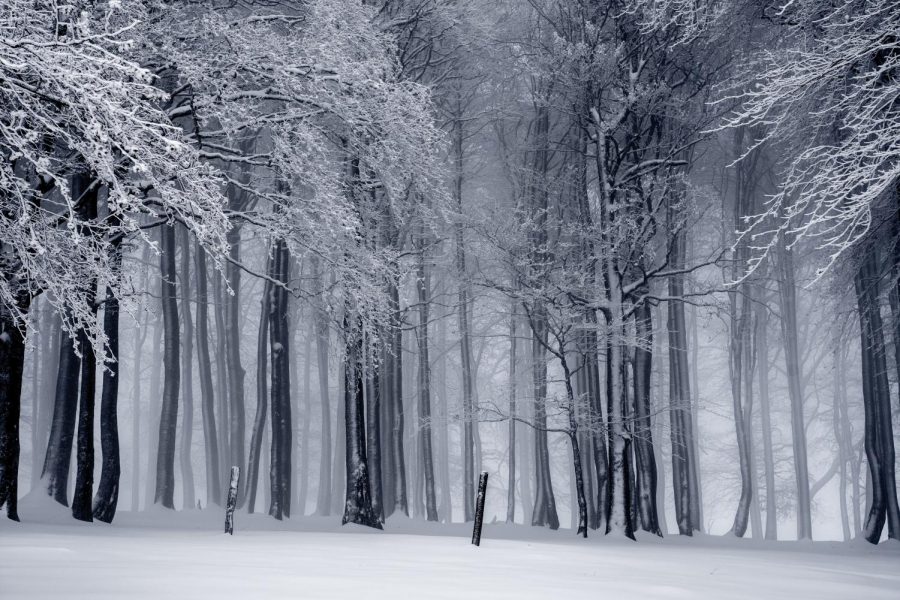 It was dead of winter. The air was so cold, you could see your breath freeze in midair. All in all, it was the perfect night to sleep in and sit by a warm fireplace.

A lone villager didn’t have that privilege. She walks through the snow, almost as tall as she. The frozen forest echoed with the howling wind, so loud the poor villager couldn’t even hear her feeble breaths.

She had nothing but a thick, woolen winter coat and a bag; that carried what little food she had left.

It wasn’t a surprise that the villager was out in the storm. She often made spur-of-the-moment choices that she regretted. This trip was different, though.

Her granddaughter; not that she was old, she argued; was fatally sick. In this time, it wasn’t much of a shock for the young to get ill.

It was only fate taking hold. She understood that she wasn’t to mess with the bigger picture. But she could at least comfort her in her final moments.

The cold was biting savagely at her face, the only exposed part of her body. Chilled to the bone, she continued her journey. While she took one brave step forwards, and the wind pushed her two steps back.

She felt so frozen. Her food was no longer able to be eaten, as it was a solid ball of ice now. Fear coursed its way into her heart, and she could not close her eyes; as they might freeze together.

She didn’t want to, but it seemed to be fate. She was blinded by the swirling masses of snow, frozen to the bone, and starving. At least her body would be preserved, the lone villager thought with bitter remorse.

The villager trudged on, if she would die, she would not go without a fight. Eventually, she had no more warmth and was barely moving. The wind whipped around her, causing a flurry of snowflakes to find their way into her eyes.

Finally, with a thump, The villager fell into the powdery snow. She tried to get up but to no avail. The villager tried to heave herself up, but she had nothing to hold onto.

She couldn’t even sigh with regret, for she had no warmth to produce even a normal breathing pattern.

A laugh almost escaped her cracked lips, when the snow around her started to melt. The bitterness of the entire situation left a horrible taste in her mouth.

Her eyes closed, ready for the soft light to take her somewhere where she’d be warm.

The warm embrace of the inevitable almost had taken her, when she felt a cold finger on her cheek.

The villager jumped slightly and ripped open her halfway-frozen eyes.

In Front of her, was a dark figure. Its eyes were hollow, and its face was transfixed in a permanent expression of extreme sadness and pain. Tears were openly flowing, and the villager was amazed to find they didn’t freeze on the creature’s face.

The odd thing was, it’s body was in the shape of a small girl; yet the features were disoriented, like looking through a funhouse mirror.

The girl-creature reached out, and with its tentative little hand, it placed an almost gentle hand on the old villager’s face.

The villager gasped, for the creature had fingers laced with ice itself. As she jolted her self back into a state of almost attentiveness, she started to recognize more.

The beast had long, black hair. Its skin was a dark gray, and it had little black spots all over. It looked down at the villager with a childish gleam in its eye, like she was greeting her. It would’ve been sweet, save for the constant sorrowful face and the steady supply of tears.

Finally, it hit her.

This beast was a spitting image of her granddaughter.

She reached out a now blue hand and wiped away a thick tear on the creature, her granddaughter. Immediately her finger turned so cold she couldn’t move it.

The villager had tears of her own now, and they promptly froze on her face. The creature stepped forwards

It’s dark body curled into hers, and it was bittersweet. At least her last moments would be with her beloved granddaughter, but for a reason she didn’t know, the creature drew out all of her body heat.

It dawned on the villager that she was craving warmth, and she did anything to get it, even if it meant her grandmother had to give up her’s.

Finally, as the tears of the haunting child soaked the frozen body in the snow, the lone villager had her peace. The dark child-like figure slowly rose, and carried on in a slouched stalk, desperate for warm.