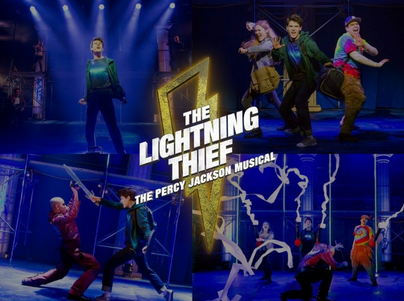 Although it is popular with young readers, I never read Percy Jackson & the Olympians (PJO) when I was younger. In elementary school, my classmates were always shipping Percabeth, taking “Which Demigod Are You?” quizzes, or crying over the death of their favorite half-blood during class. Everyone had at least read The Lightning Thief (TLT) or were starting their journey towards The Heroes of Olympus. Unlike them, I had no interest in the adventures of Percy Jackson and his demigod friends and foes. I didn’t care that he was on a killer quest with Annabeth Chase and Grover Underwood. It didn’t matter to me that he was the son of Poseidon and he had the power to control water. I wanted no part in any Riordan book discussion and I refused to involve myself with its fandom.

Then, everything changed the day I discovered its musical in summer 2018.

“The Lightning Thief?” I asked myself. “From Percy Jackson? They made a musical?! This must be a joke…” As I said before, I didn’t care about Percy Jackson; I would have ignored the video and moved on with my life. But that didn’t happen. Instead, I spent five minutes of my life listening to a song about demigods ranting about going unnoticed by their deity parents. I was expecting cheesy lyrics, poor music, and annoying references to its novel source, but, to my surprise, I ended up truly enjoying it. I liked the humorous rants, the catchy tune, and especially the emotions portrayed in the lyrics and by the cast. “The Campfire Song” convinced me that PJO was worth giving a try.

However, despite discovering its musical adaptation, I didn’t read the novel until a few years later. The reason for this is that I actually forgot about the whole thing. It was only until this past summer when I needed an audiobook to listen to while waiting for my other ones to be available at the library. So, what was free and would occupy my wait time? The Lightning Thief by Rick Riordan. Approximately ten hours later, I finally understood why my classmates were so obsessed with the adventures of demigod friends and foes.

Since then, I have been reading the Camp Half-Blood Chronicles franchise. It consists of Percy Jackson & the Olympians, The Heroes of Olympus, The Trials of Apollo, and a few supplementary books. In addition to that, I’ve also listened to TLT’s album several times, and fascinate at the work of it. In case you need more information, the musical follows Percy’s first, epic quest to find the missing lightning bolt of Zeus and prevent a war between the Greek deities. There are book quotes and references, catchy songs, novel-accurate character designs and personalities, and, if you’re a fan, Percabeth galore.

Were you disappointed by the live-action movie adaptations? Feeling anxious about the upcoming Percy Jackson series on Disney+? Are you a fan of Be More Chill’s George Salazar (he plays Grover/Mr. D)? Then, The Lightning Thief: The Percy Jackson Musical is just the thing you need!