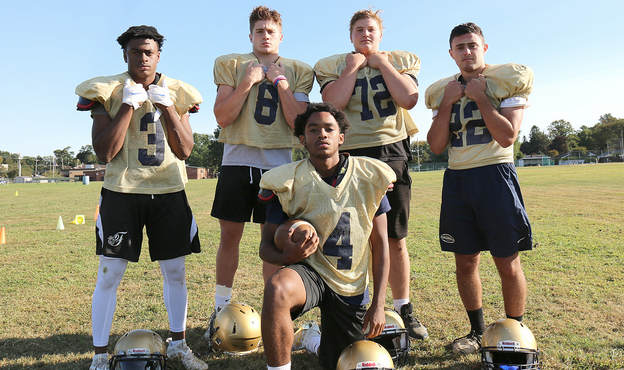 *Note: This article is written by a marching band member who knows nothing about football.*
Despite the pandemic-shortened season, the Freehold High School football team stormed through their 20-21 fall season with lots of Freehold Boro pride and stayed Boro strong. “Control the controllable,” coach David Ellis told his team before the start of the season. His men proved him right and made him proud throughout their 20-21 campaign.

The Colonials began the season with a victory over Manalapan High School. Senior quarterback Sha’Kim Shuler scored their first touchdown of the year with only 7:14 left in the first quarter. It was a battle between the Colonials and Braves. Interceptions were made by seniors Yah-Sin Calhoun and Jason Lee, while junior Ka’more Gill ran for 106 yards. After running 215 yards and a TD by Shuler, Boro won 14-12.

The match against the Colts Neck Cougars was an intense one. With a series of 3 touchdowns and ending the first quarter with 21-0, Boro was looking pretty strong. However, their success was short-lived when the Cougars played drew their reverse cards and caught up in the third quarter. With anticipation and suspense throughout the fourth quarter, the Cougars won the game by a close call: 36-35. Though it was a loss, Freehold did not back down and continued to fight and stand strong.

Next up, the Freehold Colonials versus the Marlboro Mustangs. With 14-0, Boro was in the lead until the Mustangs tied in the third quarter. After 3 touchdowns by Shuler and 3 touchdowns and an interception by Calhoun, the Colonials were victorious, 42-14.

Boro’s fourth game was against the Howell Rebels. Junior Tyler Ochojski completes a 36-yard touchdwon in the opening quarter, but Howell fought back with a touchdown. Boro strikes again by scoring 20 points in the final ten minutes of the second quarter, 26-6. The Colonials and Rebels fight for defense in the third quarter. Halfway into the fourth, Ka’more Gill intercepts a pass and takes it to a 45-yard winning defensive TD for the team. The Colonials leave the Rebels’ field triumphantly, 33-6.

The Battle for the Duke Cup: Freehold Boro vs. Freehold Township! Due to the rain, the cross-town rivalry game between Township and Boro was moved to Howell High School’s field. Though the Patriots and Colonials were missing their usual large fanbases, the FHS Marching Colonials filled in with their stand tunes and enthusiasm. Boro was undefeated with 34-0 until the late third quarter when Township scored a touchdown. In the end, the Duke remains with the Colonials with a winning score of 41-7.

With a strong start, the Boro football team concluded the first quarter with 21-7 against Middletown North. After a fumble and interception done by Shuler, the score is tied 28-28. Then, it was a race against the clock! With 2:38 left in the game, junior Kayden Hutchinson scores 2 TDs: one at the 20-yard to tie the game and another at the final five seconds!! The Colonials stormed the field as they celebrated their incredible victory, 40-37, over Midd. North.

On November 14, Freehold battled against the Southern Regional Rams. South started with a touchdown and ending the first quarter with 6-14. All seemed lost for the Colonials as they entered halftime with 6-28. However, they did not give up. In the third quarter, Shuler punches in and brings the team to 20-28. South’s kickoff takes them to 20-35 with 11:46 left in the match. The Rams and Colonials continue to fight against the clock as they battle for the victor. With less than five minutes left, Hutchinson runs a 34-yard FG and wins Boro a 3-point lead with 38-35. At last, when the time reached 00:00, the Colonials won their 5th consecutive game of the season.

The Colonials had their final game against the Rumpson-Fair Haven Bulldogs on Saturday, November 21. Hutchinson scored a 3-point field goal for Freehold, but, RFH topped the team with 3-28. It was a bittersweet game because, although it was a loss for Boro, it won RFH’s Coach Schulte his 100th career win.

Our Boro players worked hard and gave their all. With an overall score of 6-2 and ranked #6 in the 2020 NJ Shore Conference –one above 2019’s #2 Mater Dei Prep–, it is without a doubt that the Freehold Boro football team had an outstanding fall season.