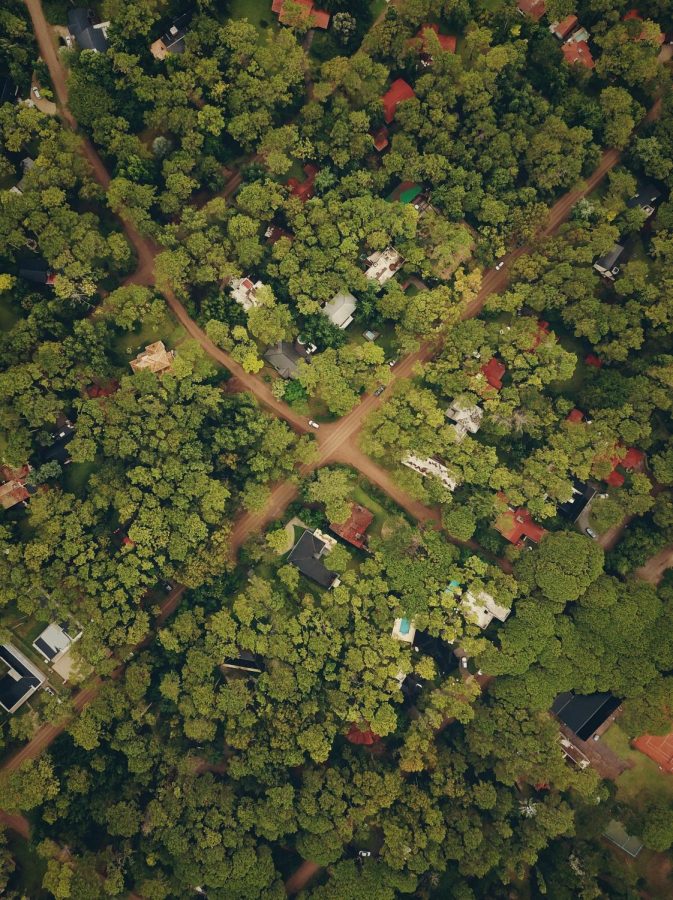 A fenced overgrown plot of land stands in between a quiet suburban neighborhood and a busy main road. Besides the land are properties with a church on one side and a different church on the other. More than half of the plot is covered in tall grass, thorns, and brambles. However, about a third of the plot which faces the main road isn’t overgrown, instead paved in asphalt and concrete. On this paved part of the property, a pair of trailers stand against the left-side fence. These two trailers stand side by side. Across a platform of asphalt from the trailers is a house. On the outside the trailers don’t seem too worn, however inside, they tell a story of a subdivision of a business which ran into problems and issues, leaving them to abandon the workplace.

Each trailer has a broken door barely hanging by its hinges led to by metal steps which opens up to the inside of the trailer. Besides the doors are light switches that don’t work, and besides those are windows that look out to the rest of the deserted plot. The view from the window reveals a flat platform of asphalt with a 3rd distant trailer and an unused boat, and in the peripheral of the view is a pile of broken concrete and a sea of overgrown grasses. The tiled floor of the trailers has nary a trace of the footsteps that walked it about 5 decades ago. The walls lined with vertical flat visually-wooden planks of sorts. The ceiling white and tiled, one similar to that of many other buildings such as the ceilings of a school. However, unlike the walls and floors, the broken ceilings are the first signs of the abandoned state the trailers are in. That, along with the pink puffs of fiberglass that has fallen from within the damaged ceiling onto the floor. Along with the fiberglass that carpets the floor, empty cardboard boxes meant for apples from companies by the names of “Independent” and “Starr Ranch” strewn around the center room create a busy sight to behold. One trailer has an office desk in the corner of the entrance room. This desk has a wooden table top and metal filing cabinets, all empty of files with only file separators (of sorts) still inside. The same trailer’s middle room has on its back side wall a magnetic whiteboard calendar hanging by one of its corners. Written on the drooping whiteboard are mentions of ‘fuel’ and ‘dumps’. Both trailers have a restroom and closet with a door that opens into the middle room. The closet has shelves within, but out of 5, the 3rd one up holds a neat plastic wrapped group of papers with a label on the plastic reading “LEGAL PADS 50 SHEETS”.

In the same trailer with the office desk to the left of the middle room is a room with two tabletops connected with and supported by the wall. Above the entrance to this side room is a plastic/paper sign that says “This Clock Will Never Be Stolen, The Employees Are Always Watching It!”- the clock the sign talks about is nowhere to be found. Two windows let light flood into the room, causing all the dust and fiber floating around to be quite visible. On the edge of this room lying alone on the floor is a colorful partially cracked vase and a double-sided phonograph record. Barely covering a part of the two objects are the remains of a thin tattered fabric curtain that once gave the former inhabitants a sense of privacy. However, on the right of the office trailer’s middle room is also a room. This room to the right also has walls where once was a corkboard but now the cork has long been torn off the walls. Some thumb pins still lay on the floor beneath the corkboard too. In this room opposite of the doorway, are three table tops connected to each other and the walls. On the left tabletop is a notebook-sized notepad of yellow lined papers. On the top of the top sheet reads “H&M PIPE BEVELERS #2 MACHINE” written in ink. In the top right corner in this room is a shelf high above the table tops, sitting on this shelf is what appears to be an old fax machine, ageing by itself sitting in the corner.

The trailer on this office trailer’s right, however, is different in layout and has different objects within. Though the differences, this trailer’s front door too is barely hanging on its fringes, a bush grows through its outdoor rusted metal steps. This trailer has two main rooms, the entrance room and the room connected with the entrance room to the right. This trailer’s first room holds within it a wooden table. What were once functional and lit up the room, the hollow fluorescent tube lights are on the ceiling. From one of them, a small abandoned paper wasp nest protrudes from one of the light’s corners. On the table are two quite sizable black mats with a rough coarse texture reading “STA-PUT”, “Coca-Cola USA St. Louis, Mo”. On the wall behind the table is one wooden shelf held up by three metallic wall-attachable supports. Alone on the top left wall of this room hangs an analog clock. There it is, that prominent clock- yet not a tik, not a tok- as the clock is as still and quiet as a rock. Forever stuck on 4:45, this clock may have once told the time, but now it tells of a time long gone. Under the clock a foldable table with a messy white plastic tabletop has an aged fire extinguisher on it. The fire extinguisher’s coat of paint is chipping off and its informational tag isn’t clean and therefore is not too readable. Besides the table on the wall an AC unit dwells, gathering dust throughout its structure. Instead of the fabric curtains found around the previous trailer, this trailer has plastic shades.

On the right side of the room is a short hallway which leads to the second main room, but this hallway is only as long as the closet which opens up to it is wide. On the other side of this short ‘hall’ from the closet is a bathroom. A small one, perfectly fit for its existence in a trailer. In that bathroom is a fuse box that faces its door, in the fuse box at the top of it inside is a yellow posted note. The sink is there, but what’s left of the toilet is the hole in the floor where it’d be connected too.. The room this hallway leads to is an airy spacey room. Where once was a corkboard now only the thumping remains, pressed into the wooden wall. In the far left corner on the side wall are plastic wall-hung file holders. A door on the right wall stays shut. Besides it barely anything is on the wall. The right side of the room is empty of any furniture, with only a lonely wall-hung file holder remaining on its right side next to the hallway left to furnish the room. This tinted plastic file holder holds two things now: brown semi-translucent roll film/photographic film and a clump of a few colored photographs.

..The photographs… The seemingly slightly faded photographs show a scene of a dark overcast day on the shores of a body of water, the opposite shore nowhere to be seen. On this shore is a salt marsh with one lonely cabin sitting right on the edge of the water. There are multiple pictures of the same wooden sea-side house, but one or two of the group of photographs show a young male figure (seemingly a teenager) in a dark warm sweater and dark warm hat and dark long pants (possibly jeans, too faded to make sure), facing both the camera and the house, even though the camera is on the other side of him.. On the floor beneath the hung file holder is a small stuffed animal in the shape, color, and form of Roger Rabbit from “Who Framed Roger Rabbit”. Maybe it was once used as a childs toy, maybe once used as a pin cushion, the conclusion on what it was once definitely used for is not clear, as it lays there- smothered in dust and laying on a rough bed of debris.

The trailer that sits alone across the cracked platform of asphalt and concrete from the two trailers besides the fence is just one room inside. Cracked glass windows let fresher air flow inside. The door, though slightly stiff, it does not hang from its hinges, but instead swings like a functional door. but this trailer however, does not have metal stairs leading inside. Within this desolate trailer lie metal tanks of what seems to be gas on its left and neatly piled crates and boxes. Standing upright still and motionless, probably once adored by its owner, is a small plastic and stone trophy with a winged glistening golden-colored plastic figure at the top, standing, her arms outstretched in a Y shape. On the bottom stone square it says on a shiny metallic metal label “Performance Plus Regional Competition”, the object being so heavily aged much of the letters have been scratched enough to be near unintelligible. Underneath it reads “Wolverine Trophy & Awards Co. [Address] [Telephone Number]”. Behind the trophy is a pile of brown bags of “Floor Absorbent”, as they read in green text. Against the wall facing the door on the floor lies an very aged and dusty black metal Stencil Machine, on the text circle the manufacturer’s name and other information is printed: “Diagraph Bradley Industries, Inc. Jumbo Model, Letter Size, Oil, Patent No., Herrin ILL, U. S. A.”. A plastic sign besides it reads “Call The CONCRETE GUYS [Telephone]”. A few webs inhabit the distant unreachable corners of the room, one strand reaching out to the cracked windows of the front of the trailer. The view, though distorted, shows a pile of broken concrete across a platform of cement in front of it, a pair of trailers besides a fence testing how long they can stand the tests of time on the left side, and an overgrown field on the right.

Two trailers stand side by side, backed up by a fence with vines growing down em and shrubs growing all around them too. Across a lonely cracked platform of asphalt followed by an aging field of concrete, another lonely trailer sits upon the grass. Though the world has moved on, they have been stuck in their past, and so, they have been unable to cope too well with the changing conditions of the world around them. Battered and abandoned, desolate and alone, the trailers on this plot of land tell tales of times long gone. Though it is admittedly nice at times and good and all to remind oneself about the past- about how things were and used to be, and remember thought to be forgotten memories, it’s best to move on along with the world and not get stuck on what once was, for a multitude of reasons, the main reason being once really stuck in the past one will not be able to move on too easily. Such is the case with these trailers, stuck in the past, overly dwelling on times past, while the rest of the world moves around them oh so fast. It’s best to remember (and honor (if necessary)) what has occurred before, but it’s best not to live in the past, as then one may miss out on what occurs in the moment. And, of course, it is best to live in the moment.