Cheating in School: Is it Right? 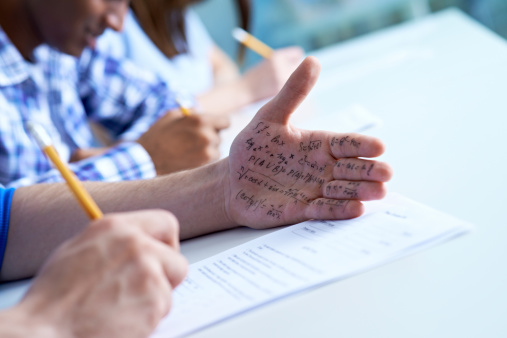 Well, we finally made it. The end of the school year is in sight, and everyone is excited to finally get out of here. However, there’s still one question that remains unanswered. One question that has been lingering throughout the year. Is it okay to cheat?

We’ve all cheated in some capacity. Whether it’s on tests, quizzes, or homework. While I haven’t witnessed much cheating personally, nor do I personally cheat, I do think that it’s an interesting topic to discuss. While in most situations one can argue that cheating in an academic environment gives an unfair advantage over others, I would argue that in some circumstances it’s almost necessary. For example, in one of the few instances I cheated, I was having a hard time in a Chemistry class. Now, this teacher will remain nameless for the time being, but let’s just say that their class wasn’t exactly the easiest. In fact, I found it almost impossible to do well in her class without cheating. Now, whether that’s because of the actual class or because of the fact that I didn’t pay attention in class is open to interpretation, but the point is that cheating was almost required to pass this class.

I guess it all comes down to individual circumstances. Everyone has their own reasons to cheat, so it’s impossible to make a concrete statement about cheating. I don’t cheat by the way.